How to Respond to the Negative Nancys: Three Steps for Creatives and Entrepreneurs 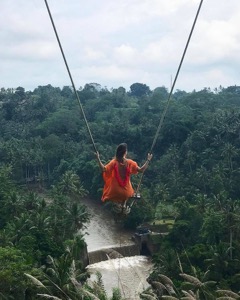 Sometimes when we are out there in the world being incredible, generally enthusiastic and making our dreams come true, we will encounter a naysayer, a negative Nancy, or a prophet of doom and gloom. This person isn’t really so sure what you are dreaming of is possible. Maybe they think it’s just a bad idea or they fear (gasp!) it might be dangerous. Frequently, we are our own harshest critics, but sometimes it happens to be somebody else.

For example, just after leaving my job in medicine, I shared an idea for my first post-medicine adventure with a colleague. I was planning my first spiritual workshop. I planned to guide others on shamanic journeys and help others connect with their spirit animals, an ancient source of power , love and inspiration. I was sooo excited! I knew how good it might make people feel if I could do it successfully.

This person leaned in, lowered his voice and took a serious and whispery tone with me, “You know… I’ve hear that kind of stuff- the shamanic journeying and stuff can really F%&$ people up…”[raising eyebrows] For a moment, I was caught off guard [deer in headlights]. “What do you mean?” I gently inquired. He responded, “Like they could go psychotic- or just not be emotionally prepared for that kind of experience…I’ve heard stories about that…there was a woman from my high school class it happened to”

I don’t remember what happened next- I think soup was served. But, I do remember going home that night feeling a little deflated…his dark comment gave me pause…could what I dreamed of (helping people connect to spirit) somehow be a terrible thing? I thought about it.

On one hand, I supposed he was right. If I tried to do this retreat with people who already felt terribly unsafe and unstable in the world, it might be very unsettling for that kind of person. But I planned to do this with seekers who simply wanted to be more empowered in their lives? Or, I pondered, “What if I really wasn’t ready to teach this yet?” But, inside, I felt really kind of ready…(scared-cited—a little nervous and a LOT excited!). In the end, I didn’t let his concern stop me. I went on to create the retreat. And, as all things completely worth doing always are, it was challenging and difficult and illuminating and beautiful.

Five years later, as I reflect, I realize–his comments and perspective were likely all about his fears OR a maybe they were a projection of my unconscious ones. Maybe he was afraid I would fail. Maybe I was? In any case, it doesn’t really matter.

Years later, I developed a method. The response to cynics, naysayers (or “haters’ as some lovingly refer to these individuals) I use is always the same.

1. Check in with yourself—does any part of their “concern” resonate as TRUE for you? If the answer is yes- it’s time to hit the “pause and reflect” button. Then, feel free to adjust your sails as needed (or not).

For example: Once, I shared a different dream (selling 10,000 copies of my first book, What The Walrus Knows, in the first year) with another person. He told me how terribly unlikely that was in the publishing world. I thought about that too and, in a way, he was right (it was unlikely).

After I got off the phone with him, I began to think of all the reasons it would be really awesome to defy those odds. Rather than remain pragmatic and deflated, I decided to take inspired action in all the ways that felt good to get the book into the hands of people it might serve and help. I mailed free copies to ten prominent libraries across the country (it raised my vibe to think that it was shelved in the hallowed halls of the NY Public Library.)

Maybe somebody is doubts that you can become successful at [fill in the blank amazing feat you dream of daring] you could think of all the people that have ever done that thing and succeeded. I did that with self-published authors and noticed I was in great company with other people who began by self-publishing: Beatrix Potter, John Grisham, Mark Twain and Julia Cameron (The Artist Way). Do your own research to create a list of heroes who achieved your special dream.

Bonus points: If in some way this person’s cynicism spurred you on to even greater heights, take a moment to thank them for their inspiration.

2. Go back to being a MOFO creator like you are. Get busy doing what makes you leap out of bed in the morning. Do it for love or for spite but, do it.

Maybe, like my book selling 10,000 copies in its first year, your heart’s desire it isn’t impossible, it’s just improbable…at the moment. By taking inspired action you can shift that to probable. I didn’t sell 10,000 books that year (more like 2500). But, that book led to second and third books and (eventually) a literary agent and a lovely advance for a new book based on that original book’s message and content.

Despite the prophets of gloom and doom, the messages of love and understanding I wanted the book to convey went far beyond zero because I decided to do it anyway.

If they persist in naysaying, as the very wise Alice The Elephant says, “Toss them a loving Namaste and move on…not everybody can handle your awesomeness.” Instead, call somebody and connect with someone who does believe in your dreams.

And here’s a handy alternative response to critics that will leave them scratching their heads and free you up:

“You know – you could be right!” This phrase is especially effective when paired with a beatific smile because, rather than arguing with them, you’ll be preserving your precious energy for creating.

Don’t forget that a strange and wonderful thing is possible when you create without limits for yourself: you may inadvertently inspire somebody you love to take action on their dreams!

Do it anyway. And remember, what Jim Carrey wisely says, “You are ready and able to do beautiful things”. Watch his full graduation speech of 2014 from the Maharishi University. If you feel a little bit scared and a lot excited to see your dream take shape, it’s a very good sign. I can feel your awesomeness all the way over here where I’m standing and I’m cheering you on!