Tune Out the Loud, Tune Into the Love: Thoughts On Successful Long Term Relationships. 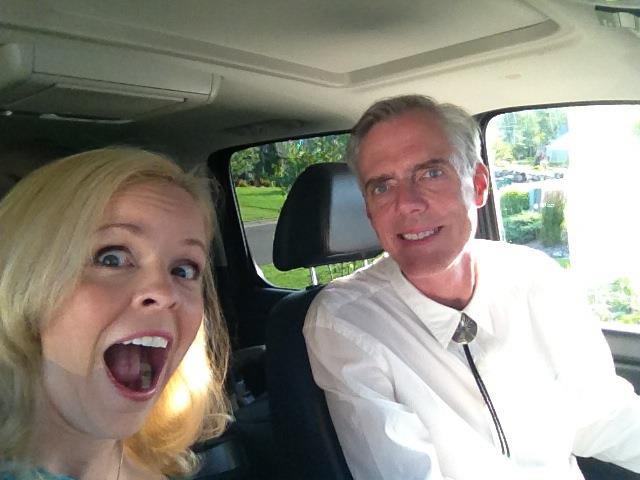 If you’ve been married (or in any long-term, successful relationship) for twenty-plus years, it’s not because you made the perfect choice back in 1990 when you pony-stepped over to your future partner on the dance floor as Madonna throbbed in the background.

Or that your souls were divinely destined to live in harmony (though they could be).

Or that somehow you were two of the fortunate ones (though you are).

It’s because of a series of teeny tiny choices you’ve both made, over time, day in and day out, choices that look a lot like these.

As my friend Indrani says, “If you’ve been married for over twenty years, that adds up to a hell of a lot of teeny tiny choices.”  One of the teeny tiny choices I make is kissing my husband Mark goodbye every morning. No matter what.  With four kids and two careers, life can get pretty wack-a-doodle, as in crazy-ridiculous. Our morning kiss is a moment where things s l o w d o w n and I remember what’s really important.  Well, on some days, anyway. On other days it’s a discipline. If we were grumpy with each other the night before, doing that morning kiss feels like doing one more walking lunge at bootcamp on already rubbery legs.  When I feel hopeless about the state of our relationship, moving in for the kiss can feel like I’m working hard, doing something like filing things alphabetically.  This particular teeny tiny choice felt pretty difficult some days…that is, until dog intervened.

Two years ago, we got an amazing dog. “Spirit” was the name given to her by Animal Allies. 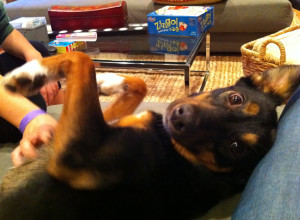 Though the name fit her to a T, I thought something more Anglican, like Charlotte, would suit her very regal and attentive face, but the kids wouldn’t hear of changing it. They did graciously allow me to give her a second name.  I chose “Francis,” to give her a more well-behaved, saint-like vibration, which, as I got to know her more, was definitely needed.   As a shamanic healer who calls spirits for a living, it only seems fitting for me to be shouting “Come, SPIRIT, come!” through the woods during our daily walks.

Spirit is an incredibly enthusiastic being who loves and adores each of us in the family with such ferocious intensity that it can literally knock us over.  People are always asking me “what” she is. I have no idea. One thing she’s not is repressed.  She’s lean and wiry, has the relentlessness of a border collie and the speed of a leopard, and experiences extreme frustration every day in her thwarted attempts to herd us around the kitchen island while we’re all getting our breakfasts together.  As her sheep, it seems we’re a great disappointment to her.

So, you may be asking, what does Spirit Francis have to do with my marriage of twenty-one-plus years?  Spirit Francis is incredibly attached to both Mark and me. Every morning when we try to make our teeny tiny choice, she creates an obstacle.  When we kiss, the dog goes insane. She begins barking in a shrill, bust-your-eardrums way the split-second she even suspects we’re about to attempt our morning smooch maneuver.  I’m sure this kind of barking and anxious leaping around was a key behavior for Spirit’s breed (whatever it is) while herding 3,000 head of sheep along the wuthering heights, but when it’s directed at you full-blast at, say, 6:30 a.m., it can be rather jarring.   I know at least one of you reading this is going to be a dog trainer. “If Spirit Francis was well-behaved,” you’re saying right about now, “perhaps you wouldn’t be having this problem.”  It’s simple issue of dominance, you say? Yes, I’m sure it is. We won’t argue. We’ve been dominated.

What’s become fascinating to me is how exquisitely difficult Spirit Francis has made it for me and Mark to take that teeny tiny step we know we must take to keep this marriage ship sailing.  Her barking is so loud it reminds me of the dark voices in my head that sometimes bark at me to “Hold a grudge! Don’t be nice to him! He left the kitchen in a mess!” Or “This thing can never work out. We’re tooooo different.”  Or (the very worst kind of barking) “Somebody somewhere has a happy, easy marriage, but mine is doomed because Mark and I made the wrong choice in choosing each other.”

Some days, the dog’s barking is so shrill and so loud and so disconcerting that we both actually physically cringe as we go in for the smooch.  Sometimes, we think ahead and sneak into the garage for the smackaroo. On a rare day, I’ll remember the kiss while we’re standing at the bathroom sink without Spirit Francis and we’ll snog before she catches us in the act.  Every day our kiss is different. Sometimes it’s a dutiful peck, along the lines of unloading the dishwasher, something that must be done to keep life from spinning out of control.  Some days it’s an air kiss blown at each other because we’re both in such a full-on frenzy of rushing out the door.  On really awful days, we “forget” to kiss, even though we both know we’re “forgetting” on purpose, and that ends up only feeling like a terrible loss.

On very magical days, the forces of the universe align and we have a really amazing kiss that feels not unlike the very first.

Spirit (the dog and what’s acting through the dog) has taught me that in order to cultivate the treasured relationship of my marriage, I must ignore whatever loud, shrill barking is going on (the dog’s or the snapping and snarling in my head).  When the barking is loud, making it exceedingly difficult to enjoy, relax into, or even want to attempt that goodbye kiss in the morning, I’ve learned that I must tune it out so I can tune in to my beloved.  That’s the one thing I must do to chose my marriage again for today. Every day.