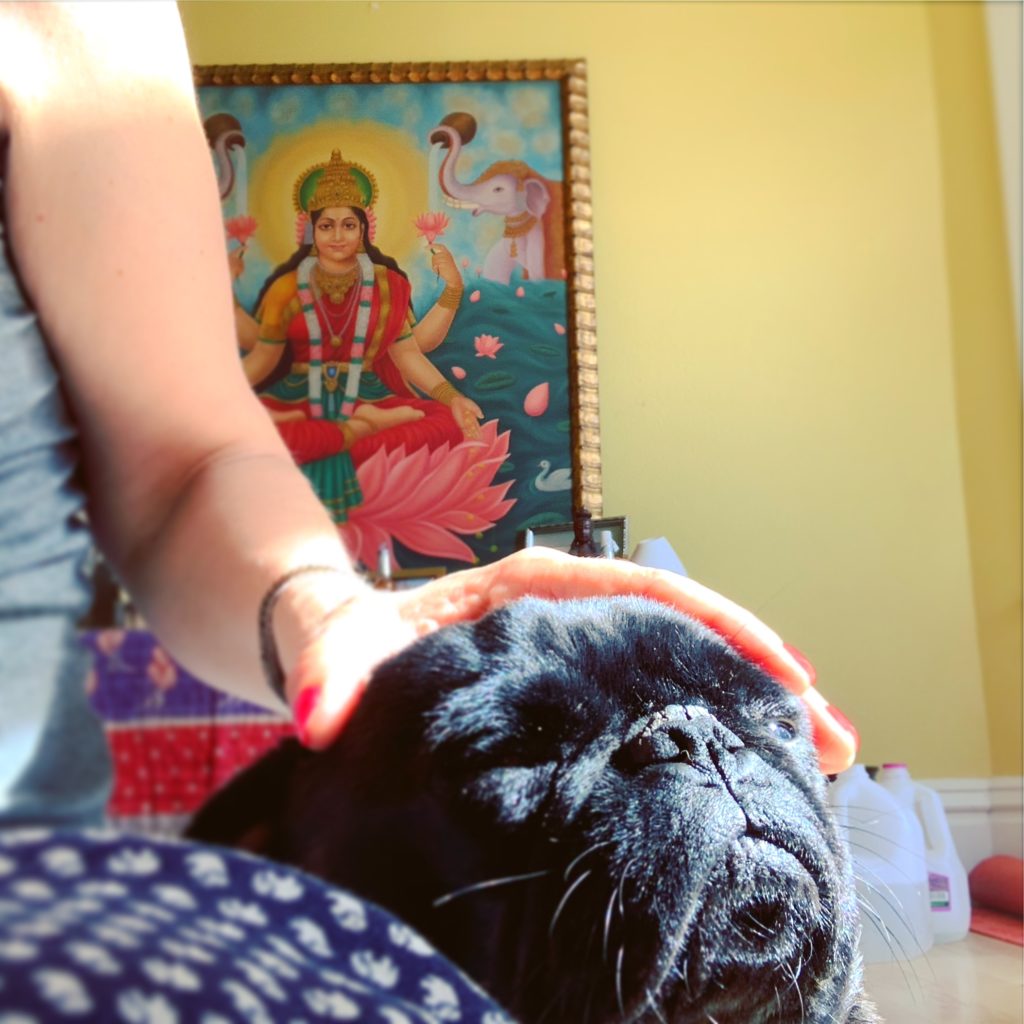 I’ve been saying, with a certain buoyancy: “I’d LOVE to go on a silent retreat!” for ten years. So, when a three day Vipassana retreat popped up in my feed, I registered immediately.  My personal integrity was at full steam. Vipassana is a meditation technique said to be taught by the Buddha himself that helps to calm the monkey mind.

Twelve of us arrived on a Thursday evening and were oriented. Then the period of silence formally commenced. I’ve been meditating with imperfect regularity for 15 minutes a day for nearly a decade. Even so, when the bell rang after 50 minutes of sitting in meditation, I was quite relieved to head to bed.

The wake up bell rang at 4:30 am and I rose feeling excited for the opportunity to practice the technique again. The first 50 minute sit at 5:00 am was fairly easy. The second one from 6:00 to 7:00 am was harder.  I checked the schedule. We had an hour for breakfast and an hour and a half of rest afterwards. After breakfast I went to sit out by the lake and felt one with all of nature. I remembered a friend who said she hated Vipassana. I chuckled and wondered why.  The lake rippled kindly and, for a moment, I was in in harmony with all that is. Vipassana means “to see things as they really are.” Things were really beautiful.

Not too much later, my mind unexpectedly became dominated with a myriad of thoughts: questions I wanted to ask, commentary I wanted to make, and (oddly) real estate. Surfing houses online happens to be one of my “go to” activities when I feel restless.

The 1950’s house we were retreating at was exceptionally charming. I loved the white pines along the shore. It reminded me of my parents old cabin. My parents! I love them so much.  Maybe we could buy this place…I wonder if the owners would be amenable? I’ll have to write them a charming letter, I thought to myself strategically. I’ll convince them we are the “ones” they should sell too. How would our kids feel about the move? Ehhhh, if we’re happy the kids will be fine. It was perfect. I loved this place.

As I racked up the hours sitting in silence,  I also began to notice some major problems with our instructor. How did I not catch it earlier? When he was teaching us, I noticed that he became ZeFrank, narrator of the YouTube video, “True Facts About The Cuttlefish”. He also used the word “laser” frequently and his pronunciation was strongly reminiscent of Mike Myers character “Dr. Evil” from Austin Powers. I wanted him to stop talking. He kept re-explaining the technique again and again. It felt excessive.  I also began to feel like my head was going to pop off.

Whoever says “life is short” has never attended a Vipassana meditation retreat. My room which, initially, had felt like a tender refuge now felt like a Turkish prison cell. I wasn’t tired anymore, I was annoyed. I started fantasizing about leaving the minute it was over. What if my friend who drove me here wanted to linger.  I’d have to get a Lyft. Does Lyft even come out this far??

I wanted my phone so badly (which I’d reluctantly and unwisely surrendered to Dr. Evil 48 hours ago) so I could go to Realtor.com and look up the home’s price history. What were the property taxes?  What if this place was already on the market, was I too late?  Could we swing the payments? As I much as I hated being here…it was also just so fucking perfect.  I wanted to move in. Maybe before Christmas? The holidays would be amazing here.

The bells kept relentlessly calling us to come back and sit in the grim silence. I’d amassed maybe ten total hours of meditation at this point. My back ached. My leg fell asleep so completely during one session that I pondered if it might need amputation because of microvascular damage.  Was there a leg surgeon in town who could do the procedure with any skill? At one point, the guy behind me toppled off his meditation perch with a heavy thud and groaned. I darkly thought to myself, “Wake up people, we are meditating!!” (later he reported he had fainted from severe knee pain).

The IDEAS. I had so many extremely clever ideas for writing, for retreats and names of retreats. I was dying for a piece of paper, a journal, anything to write it all out and get this immense brilliance of my head. So I wouldn’t forget. But, paper and writing was also forbidden. With all of my self-soothing compulsions (speaking, writing, walking long distances, being on my phone) blocked there was nowhere to hide.

All of my mental energy, normally scattered outward exponentially, was now distilling into something akin to a hand grenade inside of my mind. The pin had been pulled.

By now, when our leader spoke at all, or especially when he said “uh hum”, it became an extreme battle with myself not to break. This was too much to bear! Why couldn’t he just use fewer words??

I also started noticing that I was the only one noisily gulping spit at a rapid clip during each fifty minutes sit. My mouth was producing excessive amounts saliva. Or had it always? Was my salivary malady diagnostic of a spiritual condition?  I remembered a rare case of hypersalivation associated with pregancy. Was I knocked up? It happens, at least in the bible.  I began having the recurring thought that I would spontaneously scream, open my mouth (inadvertently releasing a gallon of unswallowed spit to an aghast audience) and disrupt everybody..revealing how totally berserk I REALLY am.

I was approaching the final evening. I needed to get a grip on myself. I decided to use my appointed time in the lakeside sauna as a purification ritual. Please fiery Russian sauna, I begged.  Burn off all of this unwanted thinking and my drooly-ness so I can get through this without losing it was my somewhat sketchy but desperate prayer. I believe in the power of the banya, but the two hours of meditation/teaching that followed my sacred steam were somehow even more excruciating.

We ended the evening with a loving kindness practice of “metta” that our instructor assured us, with a gentle smile, would “soften” up any difficulties we might be encountering. He suggested we feel into our heart space. All I could perceive was emptiness. Actually it was more of a sucking sound. A black hole.

After concentrating very hard, I was pleased to be able to scrape up a little love stuff in my cardiac crevices to weakly squirt towards a few beloveds. Then, he directed us to share this love with somebody who had wronged us (Are you kidding me???) My blackened heart’s doors slammed close at the very idea. I threw up some barbed wire to be sure. I shuddered to even bring to mind that person who’d wronged me.

After my loving kindness fail, I returned, full shame spiral underway, to a cabin filled with with most insane chorus of snoring I have ever endured.  During the day, some offenders had already demonstrated their brazenness by skipping the formal sitting sessions and sawing logs vociferously in the adjacent room.  Worse yet, one unconscious suspect snortled and huffled while seated upright alongside us during the formal meditation sessions.

As somebody intelligent would later remark, “I never knew people could snore in so many different ways.” Soprano snoring, horse whinny snoring. On this final night, unable to escape the snore-pocalypse, I rolled onto my back to practice corpse pose.  At least maybe I could try to relax and practice dying. Thirty minutes later, I woke myself up with a single loud hog-like snort of my own making. It was so sudden and thunderous it appeared to temporarily wake the others and sweet silence descended. Justice?

The 4:30 am bell seemed to ring earlier than usual, but somehow I managed to sit for the first 50 minutes alone in my room in relative peace. Cautiously optimistic, I walked outside.  Fat impossibly beautiful snowflakes were falling softly reminding me of the cosmic love we are always swimming in whether I am aware of it or not.

Suddenly, I felt so much gratitude for this place, these white pines and yes, especially our leader. Seriously, this guy was such a precious motherfucking gem of human goodness!  I was astonished at the prowess of his teachings and at the fierce effort he had made to bring us all here. What a guy! During the final sit together, I was completely at peace with his way of speaking. Maybe, I kindly mused, his vocal change was simply how he honored his deceased Austin Powers-esque Tibetan meditation master? I didn’t need to understand it.  It was all brilliant.

We ended the weekend with another round of loving kindness (metta ) practice. This time, though, my heart was so full it was overflowing. I was loving whole slabs of people, sliding ‘em over and bringing more to mind. I was an epic virtual conveyor belt of amour.  Then the opportunity came to offer to the person who had wronged me. This time, I was shown this person in a particular context that brought actual tears of compassion to my eyes. I even gave this being a generous slab of my heart’s shimmering light.

Some say there is no spiritual growth without pain.  A few days after the retreat I can report that I have experienced some profound new levels of appreciation for my life.

According to Realtor.com the property we retreated at had just sold a few weeks ago. The retreat leader says he’ll do another retreat here in the near future. The next one will be seven days long. I’m in. I plan to introduce myself to the new owners and charm them, so when they are ready to unload the place, they’ll think of me first.

Note: This piece is satire and, in part, represents the shadow-filled churnings of my unsavory egoic mind. Special thanks go to Gini Breidenbach for her eagle editing.

If you are in Minnesota or Wisconsin check out Inner Bliss Spiritual Health Center and get on their mailing list. Arjan Lighthawk is a generous and gifted teacher.  If you want to go to a 10 day Vipassana Retreat as taught by S.N. Goenka, you can find one here in your neck of the woods.