What the honey badger knows about FREEDOM. 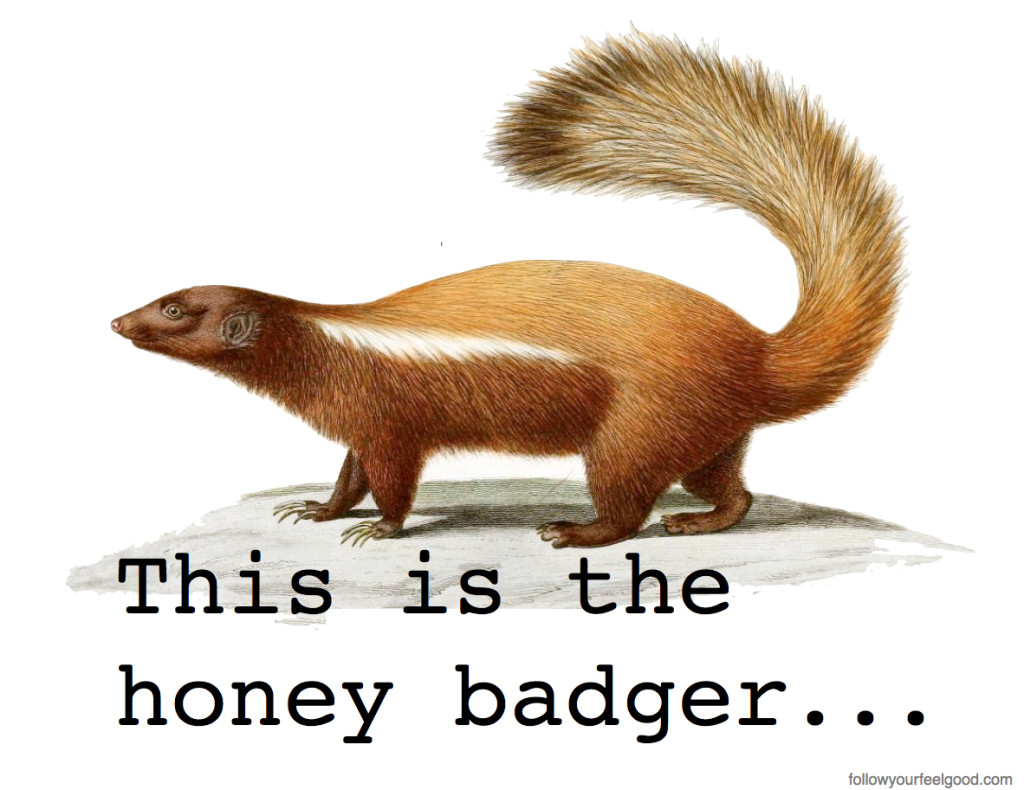 The honey badger is a ferocious, weasel-like animal with incredibly thick skin and few natural predators.

It was this particular beast that taught me a lot about freedom. Allow me to explain.

When I first witnessed the honey badger, I wasn’t sitting in a Land Rover in South Africa. I was standing at my kitchen’s Formica countertop.

I’ve discovered that certain wild animals seek us out and whisper metaphorical (or literal) messages into our ears. They have vast, deep walk-in closets full of wisdom which they can draw upon. But don’t just take my word for it.

The honey badger video I watched that day while standing next to my refrigerator has had 60 million views. Perhaps it carries a message for many of us, not just for me.

(WARNING: Watch this honey badger video on YouTube at your own peril. It contains extreme profanity and ridiculousness.)

According to the video’s narrator, the honey badger enjoys each day by going after its heart’s desires without a care in the world.

Honey badgers do things that seem unpalatable to everyone else in the neighborhood. They bite the heads off of vipers, dive into bee-infested caves, etc.

The video’s narrator insists that the honey badger really does not give a [rat’s hindquarters] what anybody thinks of its actions, which are rather impressive!

At the time honey badger showed up in my life, I was facing a bit of a crisis. I was on sabbatical from my job as a physician and was strongly considering taking a giant left turn away from medicine and into doing alternative healing work.

The new work thrilled me, but it was decidedly not mainstream. I felt scared and confused. My heart was leaning towards this strange new calling while the more logical part of my brain was shouting, “But can you afford to quit?” and also, “What will people think?”

It was like being in a jail cell with the door ajar. I was scared to walk out and be free.

Then I saw the honey badger video. I was so inspired by its fearlessness that I began asking myself, “What would honey badger do in this situation?” and, “What if I didn’t care so much what other people think?”

I practiced this new honey badger perspective with little things at first. If I didn’t care what others thought, I might a take a year off from mailing out holiday cards. That felt fabulous. Freeing. So I did it some more.

Little by little, honey badger began to help me break out of my self-imposed prison.

This doesn’t mean being badly behaved or being an insensitive person. (Though I wouldn’t want to get in a cage fight with a honey badger, I don’t believe they’re maladjusted or mean-spirited. They’re simply being instinctual.)

What if you did like a honey badger by simply going forth and doing what your heart desires, trusting your yearning?

What if you also had a reckless disregard for the opinions of other people? What might you dare? Who would you become?

After some soul searching and financial realigning, I did plunge honey badger-like toward my heart’s desire of a new career.

Since then, my life has felt like a National Geographic TV special: full of high adventure, steep climbs, deep dives, and loads of beauty. I wouldn’t change a thing. Thanks in part to honey badger, I’ve found my path of freedom.

If the honey badger doesn’t light you up, pick another wild animal that fascinates you. Watch videos of them on YouTube. Study them by watching a Nova special.

Notice what they seem to be up to. It’s my hunch that whether the beastie you’re drawn to is a porpoise, a bat or an ocelot, they have a message for you about finding freedom from whatever binds you.

A portion of the
HONEY BADGER*
Manifesto

SURRENDER
Breathe into it. Pain is transmuted. Honey will flow.

FAILURE IS NOT THE END
Rest. Restore. Heal. Go back to being bad-ass.

INNOVATE
Go where others don’t. Ignore them all. No comparison.

* This Manifesto is dedicated to Randall, of YouTube video fame.