GIANT SACRED OVEN MITTS: HOW TO BE A FORCE FOR GOOD IN A WORLD OF HURT 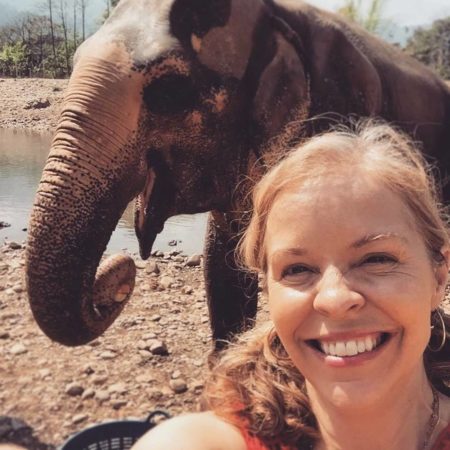 I was in Northern Thailand leading a Pilgrimage to cavort with Elephants when my group suddenly entered the village of the long necked women.  The Kayan, as they are called, are an ethnic minority of Myanmar (Burma) that were forced to flee their home to avoid persecution.

I’m no stranger to suffering.  I’ve lost multiple pregancies, survived malignant melanoma, was diagnosed with Adult ADHD and had a midlife career crisis which caused me to feel alone and confused.  However, my losses never forced my to abandon my home.  Being a refugee was not something I could imagine.

As I wandered into the dusty courtyard, I felt my resistance grow. Five or six women adorned with multiple coils of brass tightly ringing their impossibly thin and unnaturally elongated necks slowly began to emerge from the shade to greet us. None of them were smiling. They moved slowly, as if exhausted by our arrival. The whole space felt depleted and sad. These  displaced women had survived by becoming a tourist attraction- AKA the “long neck village”.

As I stood there with my uncomfortable desire to RUN FOREST RUN the heck out of there, other women in my group began gently trying to communicate with these women and inquire about their handicrafts they had laid out.  A few softly asked if the women would pose for a photograph. I felt irritated and distressed.

Was I the only one who couldn’t stand this place? What was wrong with me?  I didn’t want to think about the half-dead look in some of their eyes or how they had to flee from oppression. I didn’t want to think about how they were here trapped in an endless circus show, being ogled by tourists.   We left fifteen minutes later and I didn’t give the encounter much thought- I was relieved.

At the end of the trip, a dear friend surprised me with a gift- a carved sculpture of a long neck woman. I tried to hide my lack of enthusiasm over the gift. As I held the lady in my hand, I was flooded with shame for having turned away from those women. It wasn’t until I returned home that I realized that this carved likeness of suffering was a deep teaching for me.

I placed my long neck lady on my desk at work as a reminder that I no longer wanted to turn away from suffering. Instead, I wanted to be present…to bear witness….to be peaceful. I wasn’t sure how I’d do that but, this long necked lady became an altar of sorts- a prayer….

…..please help me to become a person who does not turn away from suffering no matter what.

I witness pain daily when I work with my clients.  I  take time to be still, to prepare to be present. Often, I can provide help and I feel useful.  There is sometimes suffering, to be sure, but, it never feels like the long necked women did to me. Perhaps it’s because my clients are at a place where they are ready to stop suffering…and we are about to do something to bring them more peace.

The particular kind of suffering I have wanted to run from is the kind that feels completely unmanageable- concentration camps, suicide, mass murders, domestic violence, child abuse, sexual abuse, rape, war, ethnic cleansing, refugees…the horrible atrocities that feel so out of my control…..what could I possibly do to help?  And not just these HUGE issues- weird worries about my kids (Will they be safe on a sleepover?  Should I have told them to be careful- it’s ICY on the roads?? ) When I felt overwhelmed (as with the long neck women) I shut down to protect myself.

I no longer wanted to do that.

A few months after placing my long neck lady on my desk,  I was given a vision which quickly became a method.

I was shifting uncomfortably on a blow up mattress next to a dear friend’s bed while my other friend slept alongside her. It was forty eight hours after her husband committed suicide. We were taking turns sleeping there, being sure she was never alone in those first tender days.

I tried to meditate …it was hard to sleep knowing my grief stricken friend hadn’t been able to get much rest at all.  My heart ached for her.  For her kids.  Eventually, I slipped into a dream.  In this dream,  was shown that my friend and each of her three high school aged children were being embraced by posses of enormous angels with gigantic and insanely soft feathered wings–a downy divine embrace holding each of them in their beds and not letting go.  I cannot emphasize how large and powerful these tender wings were-  like GOD’S EXTRA LARGE OVEN MITTS.

As I walked downstairs next morning as quietly as I could to get coffee started I noticed something I hadn’t before.  It was a carved wooden angel with horn over her main entrance…after that I noticed several more all over the house. Her family was clearly an angel kind of family.

That image of HUGE angel gangs with their vast wings sweetly holding this family lingered with me….it brought me so much peace in that period that I began to apply to everything that gave me grief.

Envisioning the ENORMOUS FEATHERED EMBRACE:  It’s a three-in-one  prayer vigil, meditation and creative visualization.  I believe in God/The Creator/A loving and Compassionate Universe…but maybe you don’t even need to believe this for it to work?

When I envision [THE DISTRESSING EVENT OR PERSONS] embraced in angel wings it’s a prayer of sorts-  it calms me and feels like a request all at once.  And if it’s true, what all the shamans all over the planet say: we are creating our own reality, then surely I’m helping create a sweeter reality.  It’s a nice fluffy one that’s jam packed with angelic goodness.

Here’s how I do it.   I imagine angel wings the size of God or Gargantuan divine feathered oven mitts gently holding all the people (or situations) that I worry about.

What has you the most distressed lately….maybe you’ve had a moment of irritation or defensiveness when somebody around YOU was in pain…you didn’t show up the way you longed to.  You had to turn away.  You got irritated or retreated.

Try imagining this situation and/or person being held in the GIANT FEATHERED MITTS!:)  (I’ll wait…..)

How does it feel?

Imagining the LARGESSE of angels, and the softness of those wings helps me to calm down enormously.

And when I’m calm…I feel good.

When I feel good, I can offer a helping hand or I can be nicer to my kids/husband/BFF instead of being stabby because I’m overwhelmed with grief.

Maybe, for you- a better visual might be a huge luminous rainbow Koala bear (scented with calming eucalyptus) holding these troubling people and happenings….or perhaps a divine Double D Dolly Parton Bosom that’s singing Amazing Grace. Whatever image soothes you is worth playing with.  Did one just pop into your head?  Use it!

The best part is:   I’m no longer contributing as much grief and distress in the world!    Whenever I witness [THE DISTRESSING THING] I can choose to drop into that feathered OVEN MITT embrace visual.  That IS progress.

Last week, I had a moment where I saw the feathery angelic MEGA OVEN MITTS holding the entire earth. Gasp!  What a beautiful feeling it was to see our whole world being held. Maybe someday I could stop fretting all together?
How do you manage to stay awake and not run from the pain of others?  If you have a method- please share it in a comment!  Together we can find ways to feel good and be awesome!