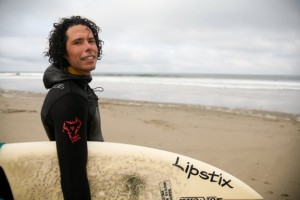 Originally published at The Fear Project. Written by Jaimal Yogis.
Part of my research for The Fear Project has been interviewing leading neuroscientists, MDs, and psychologists about how fear works in the brain and body. The other part has been interviewing everyday folks: surfers, phobics, moms, dads, police officers, etc. Sarah Seidelmann is both. She’s a Board-Certified physician who left her prestigious pathology practice to follow her instincts and do something totally off the wall. She became a shaman who helps people get their lives on track with…spirit animals.

I thought it sounded a little crazy myself. Then, I got to know Sarah better, spoke to some of her clients, read her funny and insightful book, What the Walrus Knows, and realized she really does help people overcome their fears. Unlike a lot of ultra serious doctors and psychiatrists, she has a blast doing it. She’s silly and doesn’t take her very serious work too seriously. Sarah gives people experiences that are bigger than themselves, and it’s experiences – not scientific jargon – that ultimately give people faith.

Sarah and I recently talked about how she grew dissatisfied with the “materialist-only” approach and embraced her vibrant, spirit-filled, animal world.

How the heck does a surgical pathologist that worked that hard to get to where she was leave it all to be a full-time shaman? And what is a shaman, really?

I always had an immense curiosity about the mysteries of life. As I started doing direct patient care in medical school, I realized that medical school only prepares you for part of what patients need help with: the physical manifestations of illness, i.e. cure the leukemia by dealing with the cells, repair the broken heart valve…etc. I felt so ill equipped, at times, to handle many situations. For example, when I worked on the bone marrow transplant team for a subset of high-risk breast cancer patients. I recall a young patient who was in the throws of a divorce with three young children. Her platelets (the part of your blood that acts to form clots and prevent bleeding) had gotten dangerously low and despite multiple transfusions, she had stopped responding to the platelets we were providing. My resident and I went in to her room that morning and told her how low her platelets were. There she was sitting alone in the hospital, freshly divorced, no family around that I saw, and this was all we had to say to her? That we would try to get more platelets? It all felt so wrong, like we were missing something—something BIG.

The next morning as my resident and I were flying up the stairs, his pager went off. The patient had died. Her dangerously low platelets never did recover. We sat on the stairs in the echoing stairwell and cried. We allowed ourselves a few minutes to honor our own feelings before we rushed off to the next stat page.

Those feelings, that “there is something BIG we are missing” never left me. As I went into residency to study pathology – which is essentially the basis of physical disease – in many ways to avoid the discomfort I felt of not knowing how to comfort patients, or to help guide them and address the deeper aspect, or spiritual aspect, of what was happening to them. I also loved pathology. It was complex, challenging and there was always mystery as every single case was different. But, as I practiced and as my family grew from one child (starting in the fourth year of my five-year residence) to four children, my own capacity to keep up physically and mentally was waning. I also felt as if I had come to the edge of all the knowledge in pathology that I was curious about, as if I had fulfilled as much as I could along that track. I was yearning for more human connection…and to have my work really become more about asking those deeper questions….what is life? What happens after death?

So what did you do?

I hired a coach after our third child arrived and working with her helped me tremendously. I began to work part time. I allowed myself to be creative again (gluing odd images of animals onto things late into the night with a friend in the basement). Nothing made sense to me yet. A few years later we downsized our and sold our 6000 square foot house with acid-washed marble countertops and subzero fridge and that (oddly!) felt AMAZING. I was then able to take a sabbatical and found myself I wandering back into the woods.

So how did this shaman stuff happen?

I began to connect with nature in a way I never had. I stumbled into the ancient idea that animals have messages for us. And as I began to listen for messages, I got them. That is what led me to explore shamanism and I began to journey and felt as though my whole brain and body were being rewired. I began sharing the simple ways to connect with animal messages on a podcast eventually, I had so many people messaging me and asking questions that I wrote a book, What the Walrus Knows (and app) to help people learn how to get their own messages

What is a shamanic practitioner, really?

Practicing daily has taught me that we are so much more powerful than it’s comfortable to believe and that the spirits can help us. Carl Jung was said to have said, towards the end of his life, that if he had it all to do over again, he would have worked with the spirits from the get go. The more I do this work, the more mystery is revealed and it’s truly a joy.

It must have been scary to leave such a prestigious career to do something creative and less, well, mainstream? Did you flip-flop about it for a while before leaping? How did you decide to trust what you were feeling?

Did I waver? Oh hell yes I got scared and freaked out plenty of times and still do [big laugh] and, every time I went out in Nature or connected to the sourced web of life via journeying…..I always felt better about whatever was happening or not happening: calm, peaceful. I experienced a deeper knowing that I was on the right path. But I will say, as I continue down this path that has many moments of fear, as does any path worthy of traveling, that I feel a growing peacefulness. When I surrender, there is an inner knowing that my path is worthy….and the opportunities and the clients keep coming.

I like what you said about every path worthy of traveling has fear. Fear is a natural reaction to challenging yourself, to being in the unknown, stretching your boundaries. In that sense, every time you’re afraid, though it might feel like crap, it actually means you’re growing — stretching that comfort zone. Have you had that experience? And why do you think nature works so well for connecting to the source?

I think fear is also resistance. When fear comes up, we need to ask ourselves: do we deserve what we said we wanted? Maybe you wanted to become a New York Times best selling author and now evidence is showing up that it is happening and something is being asked of you, like a speaking opportunity. Maybe you want to be a better surfer and nice big waves start breaking, and you start making sandwiches instead of surfing. Sometimes the fear is just there to see if we really want it, if we believe we are worthy of it? To go out and get “it” you must have both ego and humility.

Nature just has such an inherently high vibration- it doesn’t resist itself or its desires. It doesn’t have stories built up in its head about if it can do something: water flows, tigers leap, grass grows, dragons fly (going a little mythical) [laughs]….Nature and the Beasties are living surrendered to their desires. A brief vacation from your frontal cortex can be a good thing [laughs].

Yes, that frontal cortex can add a lot of trouble (not that I’d give mine up!). Interesting you brought up the fear of death. In some ways, you can see all the walls we have built between us and “nature” — as a way to protect us from our fear of death, give ourselves a false sense of security and a false sense of immortality. It’s pretty silly because the one sure thing is that we’re all going to die.