Being An Adoptive Mother and Learning to Let Go. 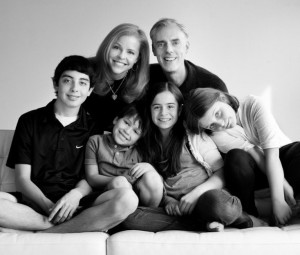 “Because I’m your mother and I love you…and that’s why” is often the only refrain I can offer my four kids (ages 7 through 15) to explain why I do the highly unpopular things I sometimes do at our house, like shooing them outside to play, teaching them how to mop the floors better, or removing the television from the family room.

Last night, when I offered the usual refrain to my 15-year-old son as I stood at the kitchen sink, I suddenly felt as if it was missing a footnote.

Inside my head, I paused. You see, three of my four wondrous children are adopted. While I’m their mother in almost every sense of the word, I didn’t give birth to them. Each of them also has a first mother.

I used to bring this up all the time, but as life has gotten busier, I’ve been less vigilant.

I don’t ever want our children to think I’ve forgotten about their first mothers. Of course, I also had to grant myself the permission to fully be their mother. It’s complicated.

I want to honor their courageous mothers, who trusted that by making an adoption plan their child would thrive. That courage allowed us to become parents. What a leap. Would I have been able to let go like that, I wonder?

I just watched a documentary on the life of the Buddha. His mother died when he was only three days old. One narrator suggested that perhaps it was that very early and very primal loss that made it possible for the Buddha to become enlightened.

His own suffering and pain was so great that it opened his eyes as he matured, showing him the suffering in the world. Buddhism, at its most elemental, is the idea that human suffering is caused by being attached to what is, and that everything, by its nature, is impermanent.

They say that to truly love something you must set it free. That’s the toughest job there is, especially when it comes to those dearest to us.

As my children get older, and as I venture by airplanes and trains and cars to far-flung places around the globe with my work, it’s helpful to think of letting go.

My oldest son reminds me to withhold judgment, to do what’s noble, and to be my highest self. I see how wise and capable and prepared he is for life.

I often see the Buddha in him, perhaps because he lost so much so early on. I can see that he, too, is sensitive to human suffering and often knows how to alleviate it.

Ever since I was a wee child with a mad cap of wild, woolly hair, I dreamed of being a mother. I obsessed over my dolls, begged to hold every baby that came to our house, and later babysat every chance I got.

I relished everything about the role of being a mom. But when it came time for us to start a family, my husband and I discovered we were (apparently) biologically unsuited for the job.

After a few years of delicately timed procreational sex, dozens of procedures endured to diagnose and assist us, and many frustrated tears, we began to explore the idea of adoption.

Just as placing a baby for adoption is a leap of faith, so is applying to parent an adoptable child. Both decisions require letting go, or non-attachment.

For me, it was letting go of the idea that it would be me who was giving birth, that being a mother is defined by having the baby grow inside my own body.

Taking that leap was one of the best things I ever did. It brought three astonishingly beautiful human beings into my life. I’ve loved them fiercely and they’ve loved my back with equal, if not greater ferocity.

Every day, they teach me new things about themselves, about me, and about how to be a better human. Every day, I have to let go an incrementally tiny bit more, and, one day, I’ll need to let go of them entirely.

In that documentary on the life of the Buddha, I learned that one of his teachings was that Nirvana, ecstatic joy, is right here on Earth. The only way to discover it is to let go of what is, because it’s the nature of everything to grow old and to someday die.

Depressing? Perhaps. Thinking of letting go of my children causes tears to spring to my eyes.

Then I remember that everything great that’s ever come to me has come because I let go.

Sarah Bamford Seidelmann is a fourth-generation physician turned shamanic healer and life coach. She lives with her husband and four children near the shores of Lake Superior. Her first book, What The Walrus Knows, is getting rave reviews on Amazon. Her second book, out this fall, is Born to FREAK: A Salty Primer for Irrepressible Humans.