What Death Taught Me About Love 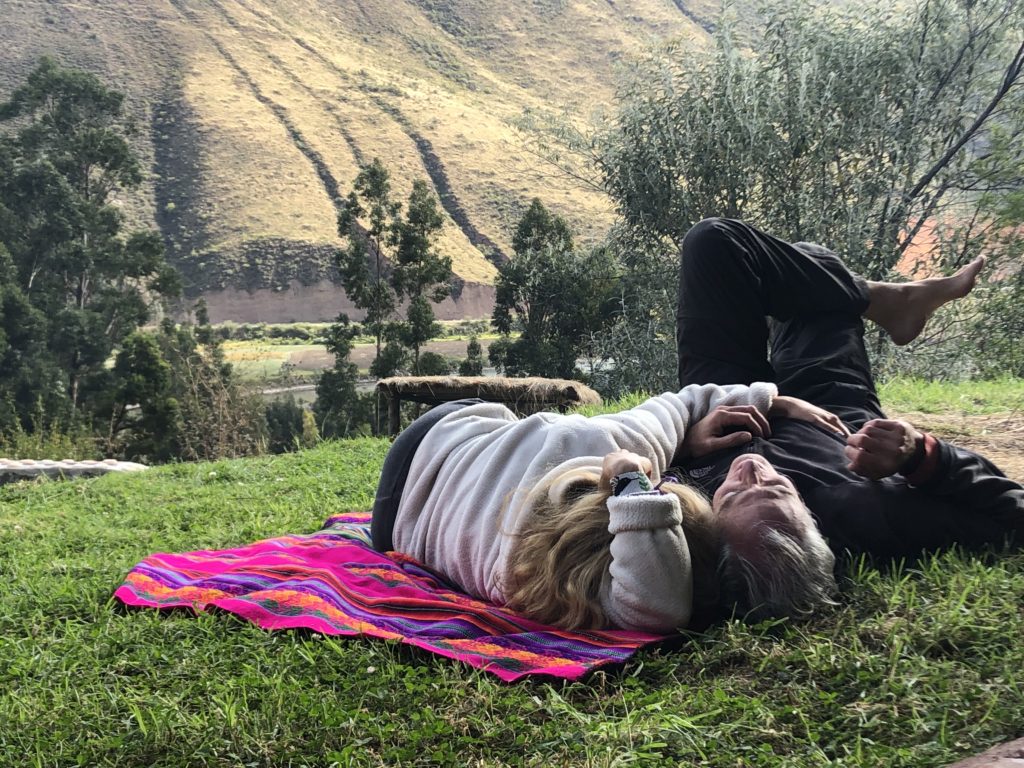 I wanna die with a broken heart, don’t wanna take it with me.

I want to live in love til I fall apart.  I wanna let life break me.

~Lyric (Let it) Break Me by Kaweah Arts

When she died, he was wrecked.

He couldn’t sleep. He couldn’t eat.  He didn’t know what he was going to do without her.  Their love was so deep and so wide. Witnessing his anguish unfurl in the years that followed her death made me think deeply about my own partnership.  What they had together seemed mythical. If our grief is a measure of how much we have loved, their alliance was clearly legendary

A few years later, I become more curious about death and dying. To explore what happens after death, I went on a guided shamanic meditation created by Robert Moss.  During this sensual experience, I met up with my dear friend Jessey who had died by suicide two years previously. He acted as my party host in this spiritual reality where I could explore the place I’d go after my death to prepare for my “next life”. I can’t be sure reincarnation is a “thing”, but previous spiritual experiences led me to believe that our souls go on and continue to evolve after we die.

Jessey was extremely enthusiastic and charming, just as he had been in “real” life:

I told him I’d like to go surfing.  Immediately, we flew together, riding barefoot atop an absolutely enormous wave edged with rainbow spray. I had no fear. We whooped with joy!

After surfing, my next impulse led us to a beautiful spot in the jungle where, beyond my wildest dreams, there was a nest of tigers curled up for a group nap.  The enormous cats made room for us so that we could snooze too. We snuggled together, supported by their supple bodies and caressed by their soft fur. Graceful striped tails flickered artfully around us as we rested deeply in an impossibly fantastic heap.

There were more miraculous scenarios to follow, but after a while (believe it or not) having these heavenly experiences began to lose its allure. I yearned, instead, to dream about my next life here on earth. So, I asked myself:

If I had one dream for my soul’s journey in my next lifetime, what would it be?

The answer bubbled up instantly:

I want to experience a legendary sort of love: To love and be loved deeply and without limits.

This thought inspired me and simultaneously made me realize how much my relationship back on earth was currently falling short.

Mark and I have been together twenty-eight years and, we’ve both been struggling with the same thing: wanting to love and be loved. So many things kept us from truly fulfilling this longing. Unhelpful patterns had been established that, at times, made it feel impossible to get back to the reason we were drawn together in the first place. Impossible workloads, cantankerous teens, long cold winters and uncomfortable periods of personal growth threatened, at times, to suffocate the last of our relationship’s glowing coals.

If I died today, or he did, I wondered: Would one of us be be wrecked with grief (from loving deeply) or, would we be filled with regret of what we weren’t quite able to realize between us?  Despite our deep commitment to each other, I knew the latter was true for me.

After recognizing that experiencing epic love was  my soul’s priority, I decided to recommit myself that afternoon.

Why wait for my next life?

I began to clean up my side of the street. I redoubled my efforts to be “soft like a feather” when he was cranky after work. I made a clear intention to not take it personally when he pointed out that I had (left a tool to rust in the rain, forgotten to feed the dogs, or been less than compassionate with one of our kids).  It went far from perfectly, but I made some progress. By not engaging and reacting, there was less angst between us and more spaciousness for love to flourish.

He was working on it too, I knew because he told me. Bit by bit, things gradually improved.  Not quite mythical love yet, but better. A new death and dying training I attended earlier this year reminded me that I still had work to do.  I wrote in my journal:

If I died today, I would regret not having loved Mark (and being loved by him)  more deeply.

Spring came shortly after this and I had high hopes. Mark and I had planned a trip to Peru together.  I made a prayer that we would have a breakthrough somehow. Our time on planes and in airports getting there was fraught with mild crankiness on both of our parts,  As we settled into the remote mountain hideaway for a sacred healing retreat, I could feel that we were both still tentative.

A stream ran down the mountain bubbling with encouragement. But, it felt safer, for the moment, to stick to our own personal work. I was still hopeful.  We went through several ceremonies and healing rituals as a group and, individually made some headway, but there was no shift in our connection. I tried to let go of expectations. Now, only three days remained of our two week retreat.

Our friend Luzma, a shaman, asked us both separately if we would like an opportunity during this final ceremony to connect.  She could arrange it.  The ceremony was a Huachuma (San Pedro) ceremony where we were each working with the heart-opening properties of a medicinal cactus found in the high Andes. I asked Mark if he wanted to do that.

“What does that mean exactly?”, he asked. I told that I wasn’t sure, but I trusted it would be ok. He wanted more information before agreeing to it. Instead of getting defensive or hurt, I waited patiently.  Midway through the day long ceremony, Luzma said,

“If you want to connected with Mark, now would be a good time…” I approached him and invited him to come and sit with me, away from the group.  He followed. We sat on the grass on my bright woven blanket and I said,

“I just want to love you and be loved by you….”  He simply replied,

“I’m with you.” and squeezed both of my hands tenderly. We both had big tears in our eyes and kissed.  Something was shifting. Sitting together we hugged under the warmth of the Andean sun for a long time.

Then, Luzma came over to us and offered to anoint us/our bond with an oil that came from Flor De Mayo, one of the International Council of Thirteen Indigenous Grandmothers.  We extended our wrists and she placed drops of the scented oil there and on our throats and upper lips.

As she walked away smiling, I excitedly said to Mark, “Do you want to renew our vows right here?”.  Mark agreed and, facing each other, we informally did just that. Then, we spent the rest of the afternoon laying on the grass, arms around each other, in awe of our mysterious new connection. Later that night, we broke our day long fast with our friends that evening celebrating with heaping platters of freshly made Peruvian cheese, olives and quinoa soup.

Since that moment, something magical has entered each of us again.  There is a constant turning towards each other. A fresh willingness.

Even with 36 hours of travel with several sweaty, sleepless layovers and now, fully back at work and in our lives, the shift is palpable.  I’m so excited about our legendary love. The kind that will, eventually, leave one of us wrecked. Because that is why I’ve come here.

I’m grateful to the spirit of the plant Huachuma and for the grief of my friend who loved his partner so deeply.

If you had to die today, is there something you would regret or feel remorse about?

If so, how could you make repairing or creating this a priority in your life?